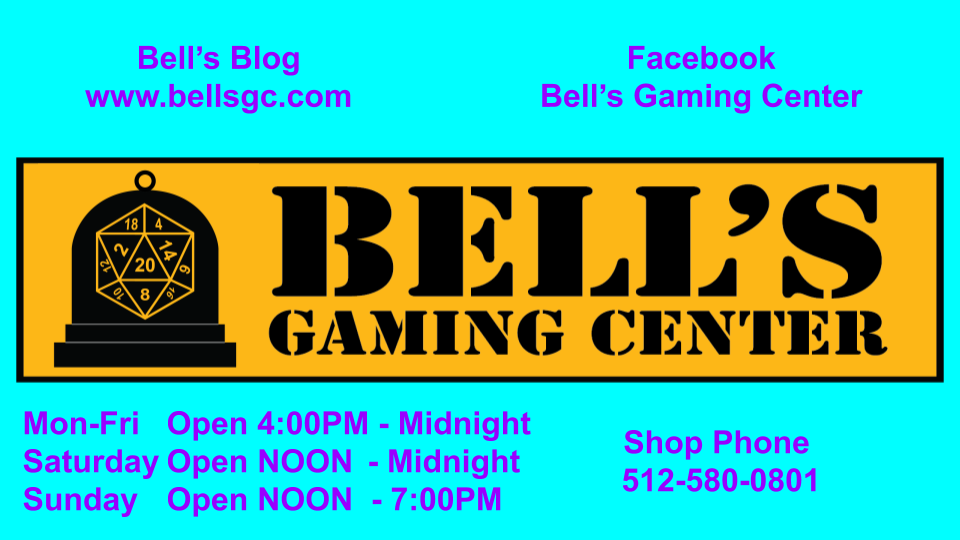 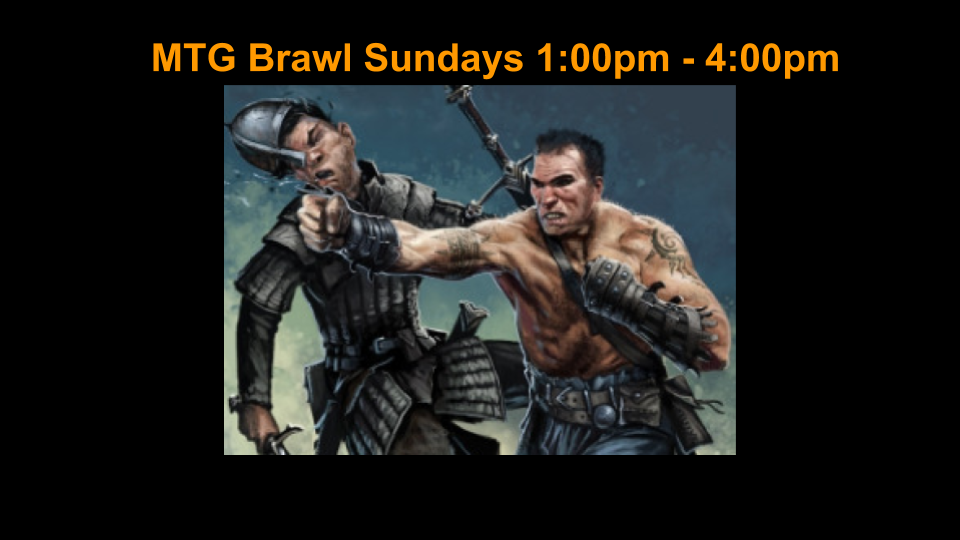 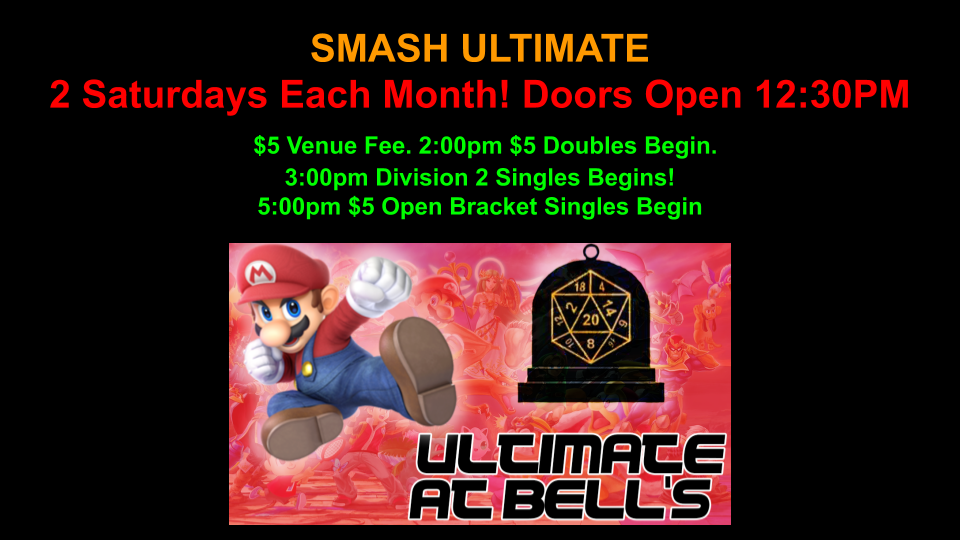 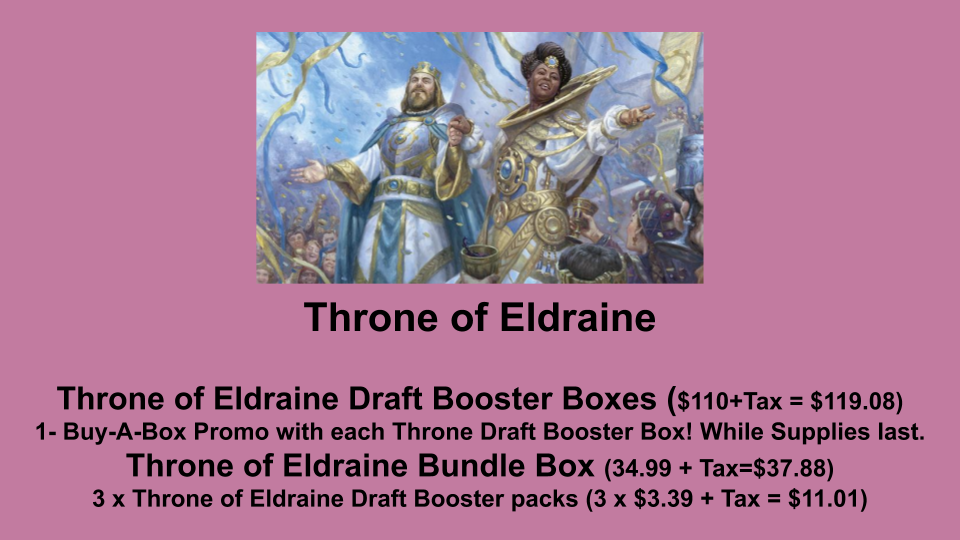 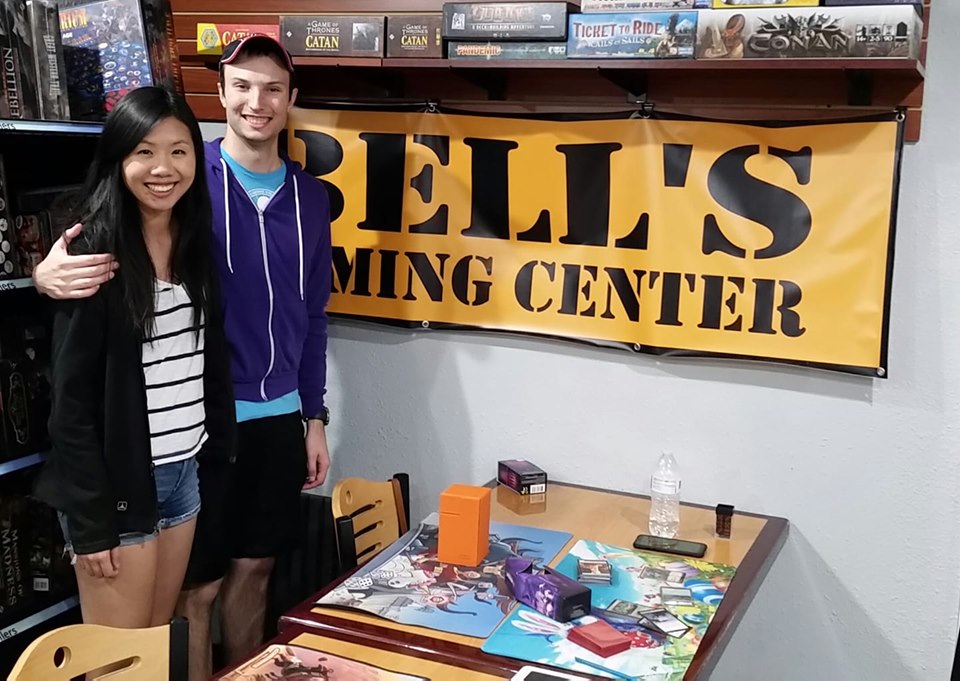 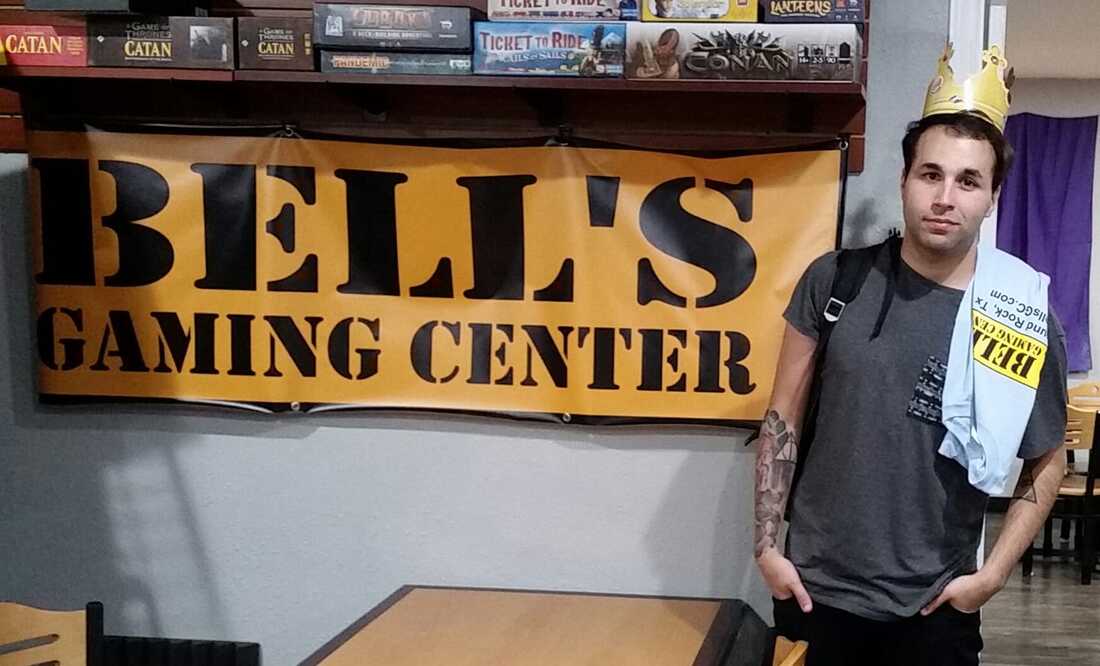 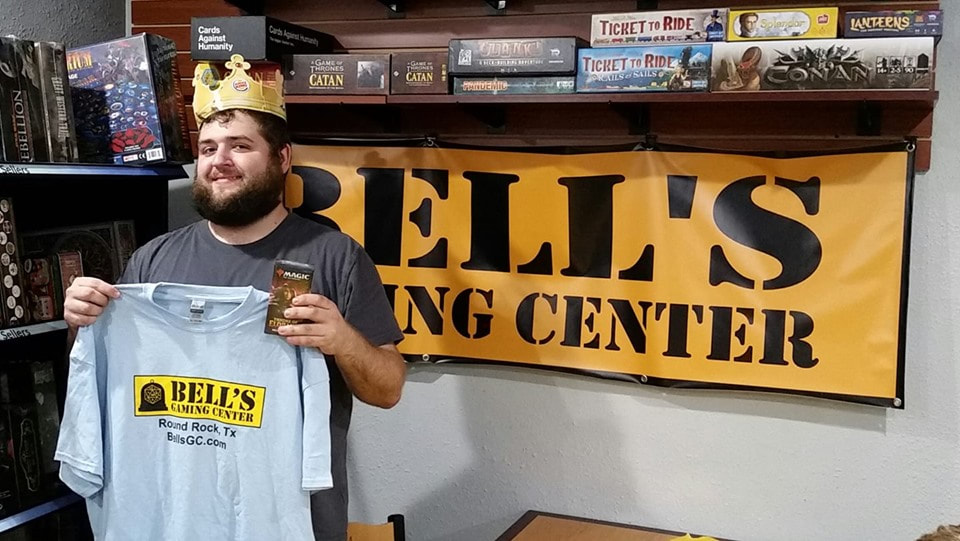 Ryan opened the most Broken Sealed pooled ever and Didn't lose a single game! He finished 3-0 in our Sunday Single player event! 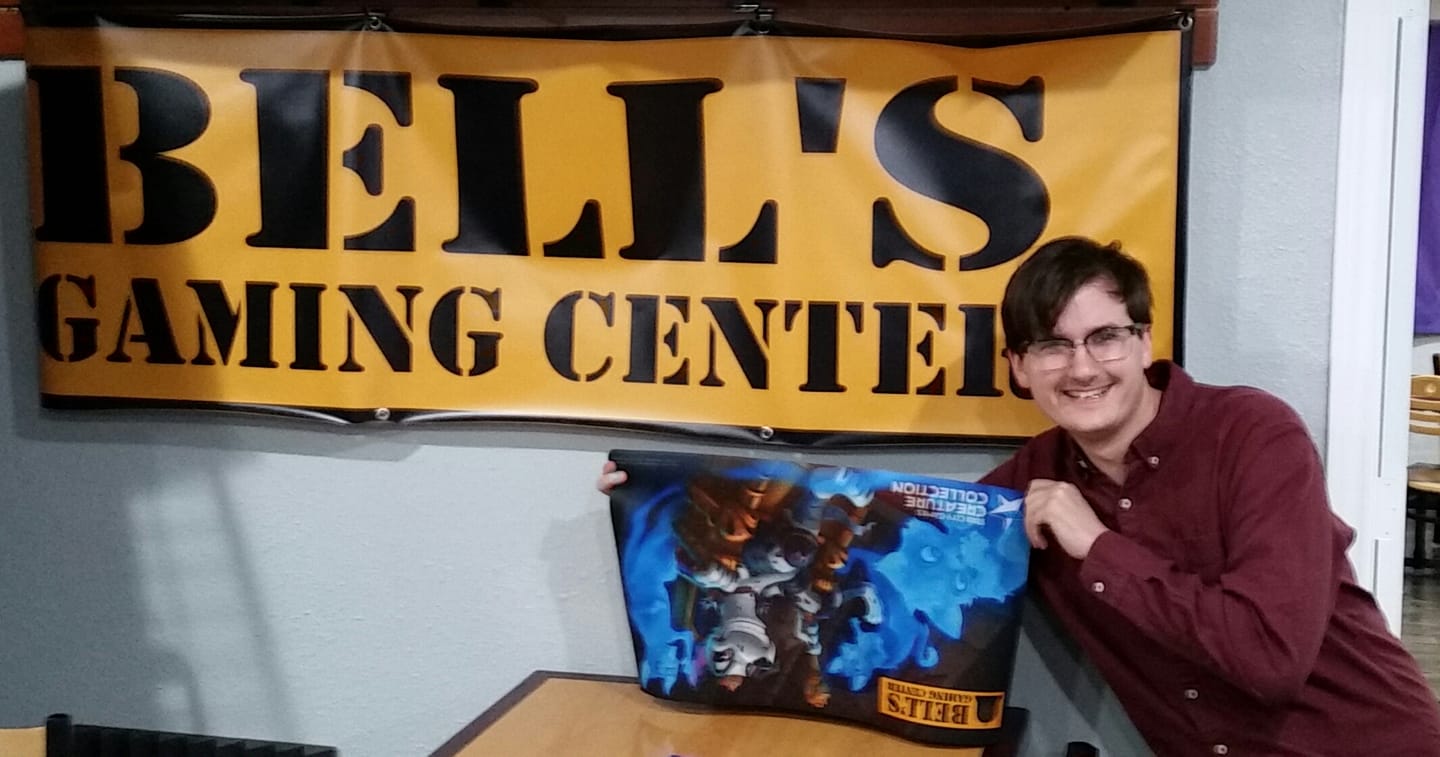 Abram went 3-0 in our Single player Midnight Madness event and got one of our Coup De Paw Playmats! ​ in addition to the 6 pack per player 3-0 prize! 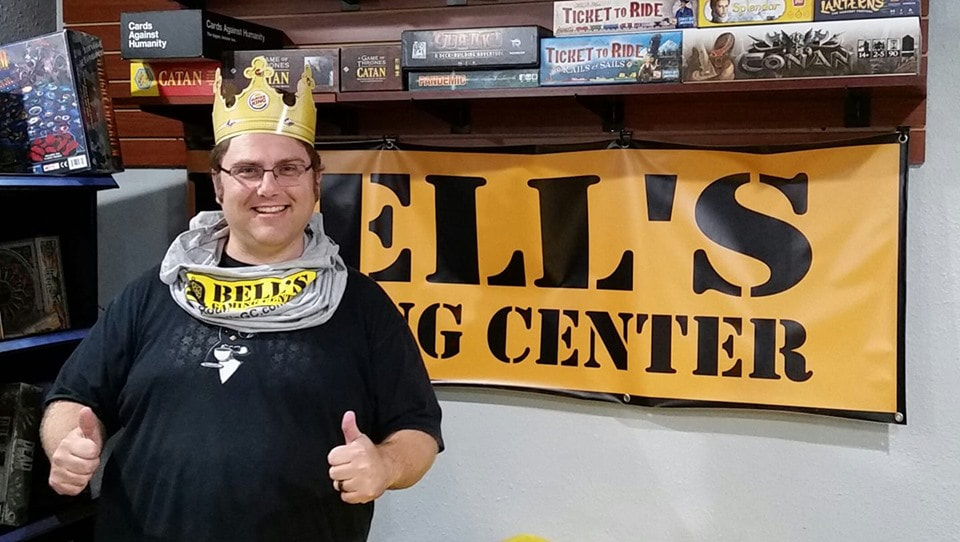 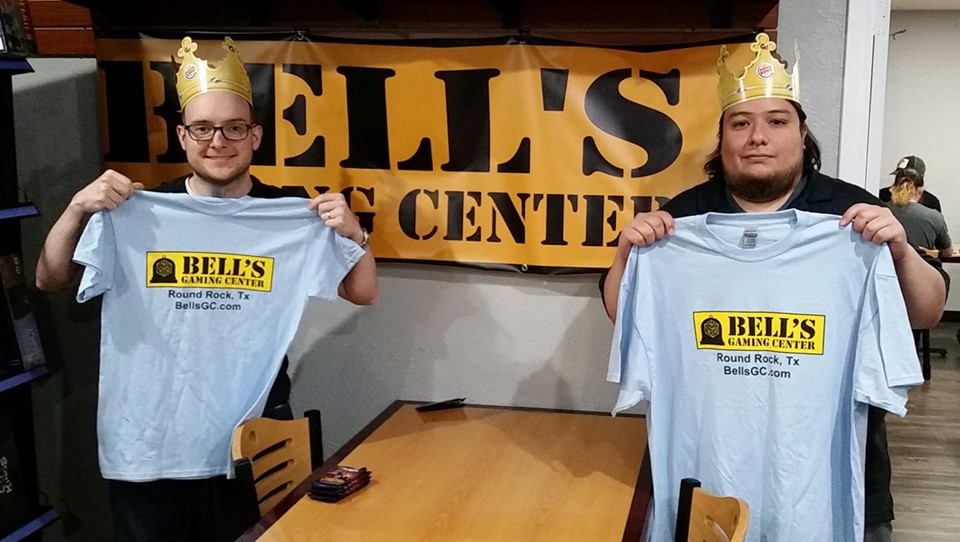 ​Ken and David went 3-0 in our Saturdays Single player event. They went home with T-Shirts and Crowns in addition to the 6 pack per player 3-0 prize!
Commander 2019 Decks in Stock, $45 plus tax each
We have 2x Morph nd 2x Popoluate Decks in Stock.

​ Our goal is to give you all as close to a Home away from home experience as we can give to you.
​
We focus on wizards play network area. If you play Magic:The Gathering or Dungeons & Dragons adventures league, then this is the store for you!
We expanded into the Video Game Genre in 2019.
We now run Ultimate Smash events
Board Gamers Click here to see our Incredible list of top rated games!
=======================
​***Bell's Code of Conduct***
Everyone is welcome.
Keep it clean, physically and verbally.
Follow event, game and store rules.
Offensive imagery, including scandalous, hateful, or demeaning content, is not allowed.
​ Keep it friendly, respectful and FUN!
No smoking or vaping in the store.
No Smoking within 20 feet of the front door.
Outside food is allowed in Moderation.
No Picnic Baskets or Coolers.
No 2 Liters or Equivalent.
We have Snacks and beverages that we sell.
====================== 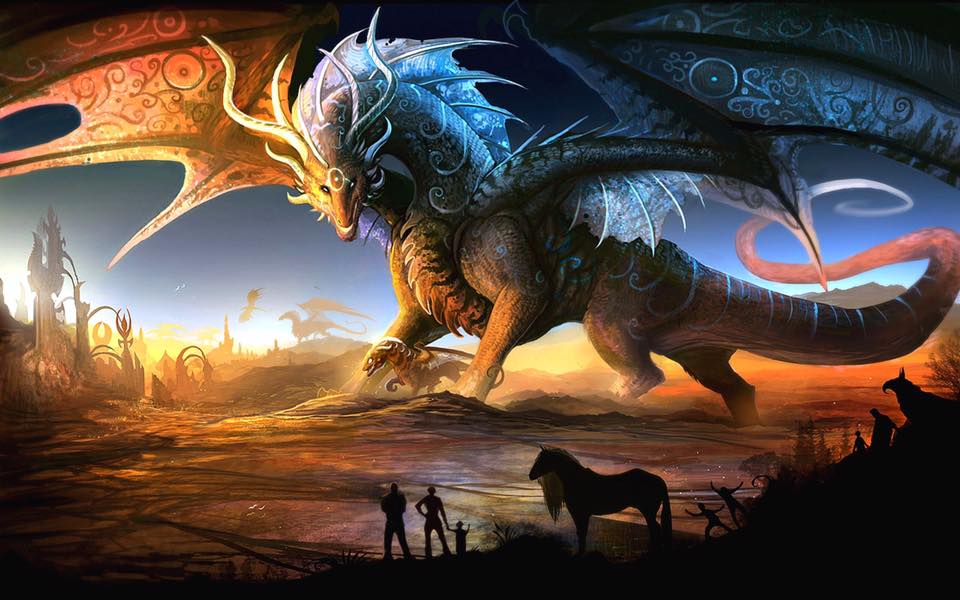 D&D Adventurer's League Signup Click here
Want to play D&D but have no one to play it with?
Join our Sunday tier 1 Adventures league
Start time 12:30pm Texas time zone.
$3 per game session fe per player.
this event is Bi Weekely. 1st and 3rd Sunday every month.
​To join click on the link above. Create an account on warhorn.net and register for the event on the event calendar.
Make sure you go into your settings and set the time zone to Texas time. It defaults to California time.
Pathfinder second edition in stock. Come check it out. 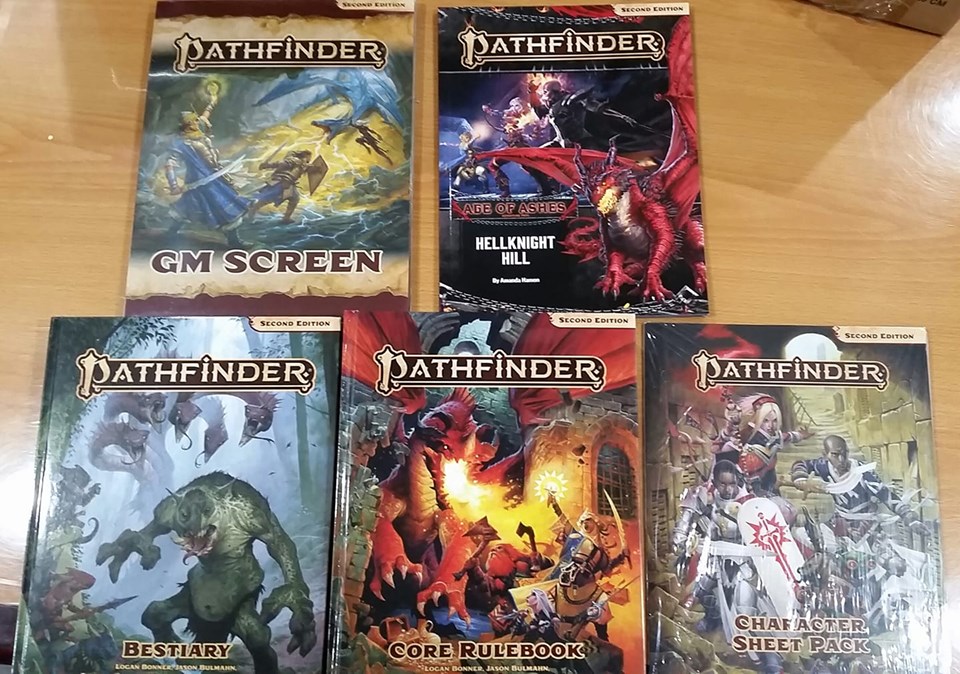 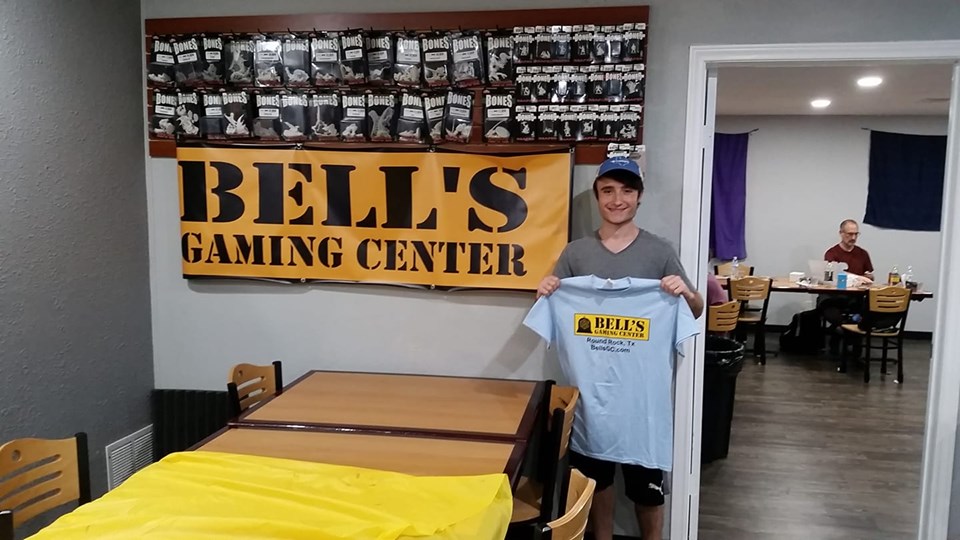 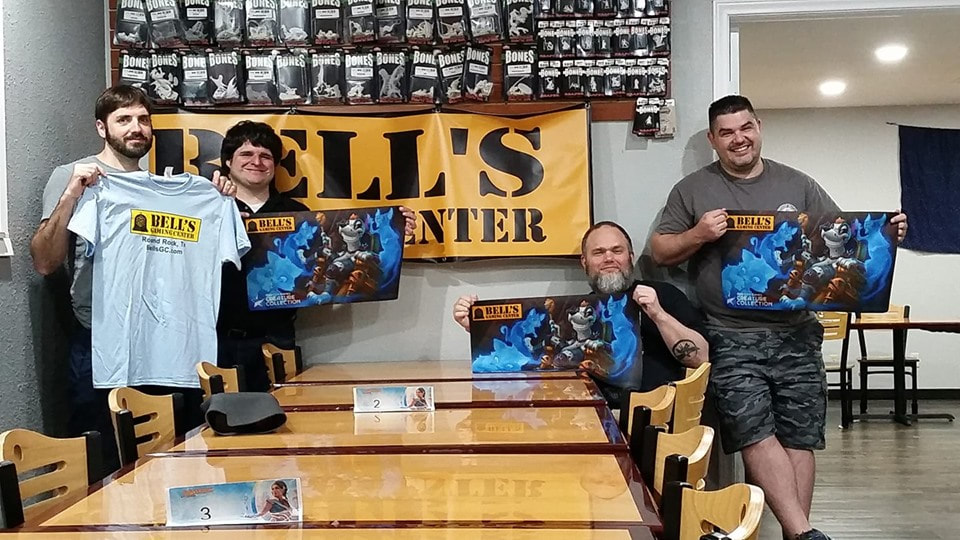 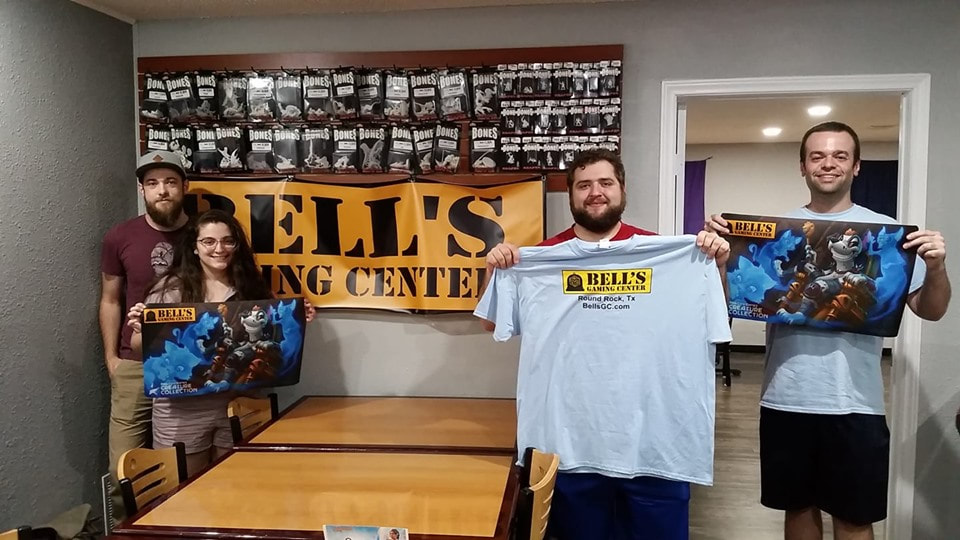 You read that right. The 2 players that went 3-0 in the single player event teamed up and went 3-0 in our 7pm 2 headed giant event.

Thank you to all 28 players that played 2 headed giant tonight! That is a record turnout for Bell's 2 Headed Giant pre release! 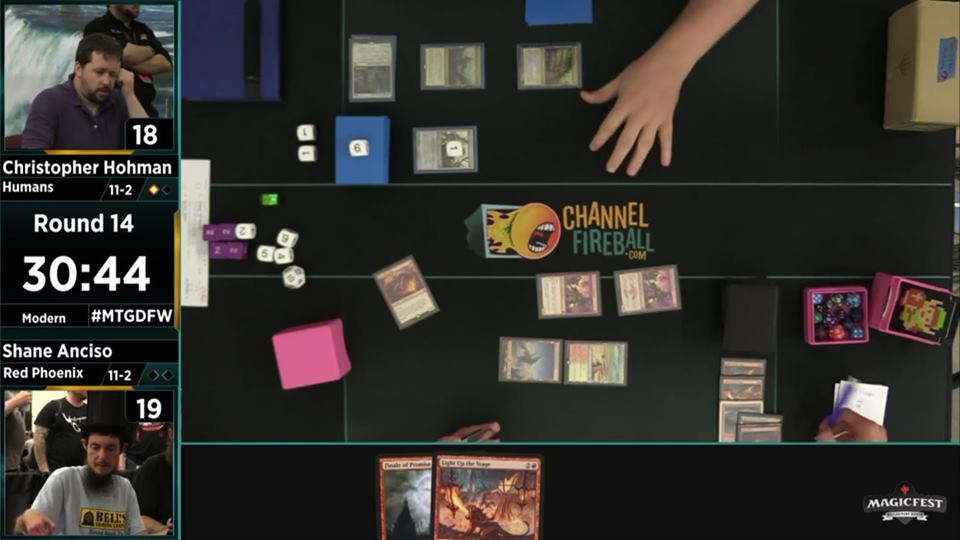 Congratulations to
Shane Anciso for Finishing 11th at
1,200 player Magic Fest Dallas
Some name you might recoginize did well too!
David The Immovable Object 40th
Sam The Pahraoh 108th.
3 players in the top 10%
Shane was representing Bell's Gaming Center by wearing one of our new T-shirts. Shane was on Camera 2 different times on Sunday! You too can get a Bell's Gaming Center T-shirt for just $14.99 plus tax. 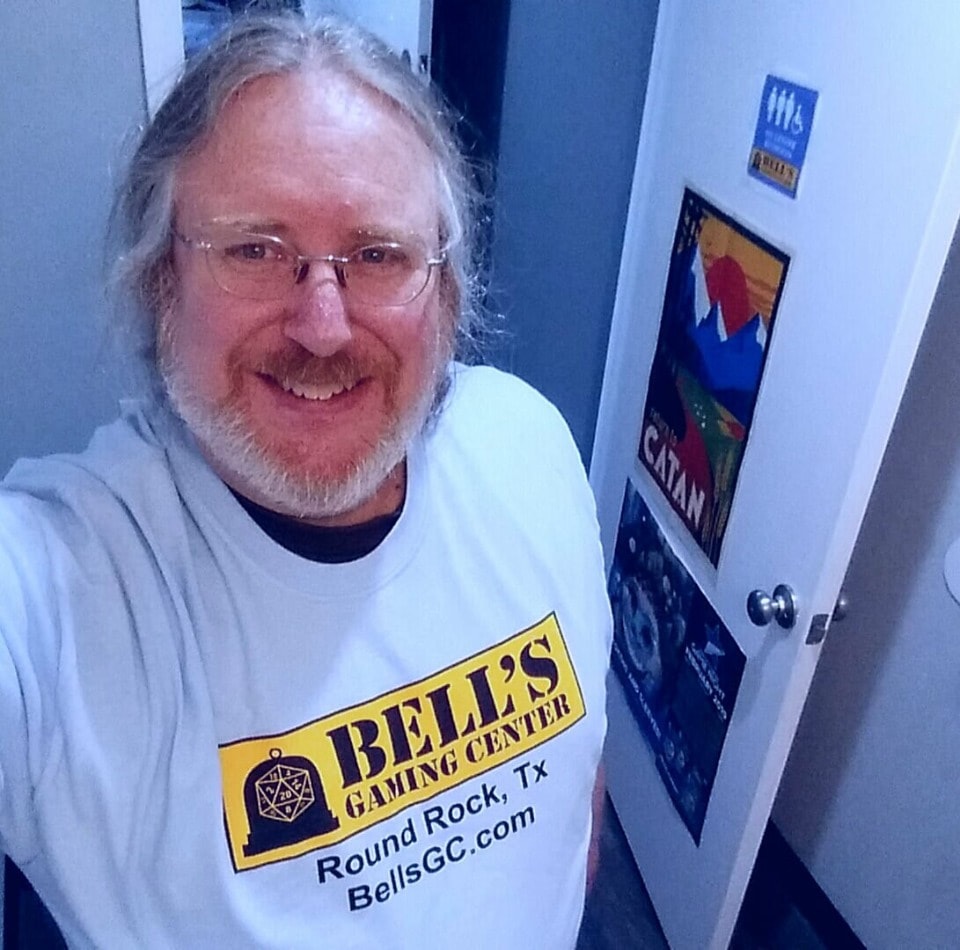 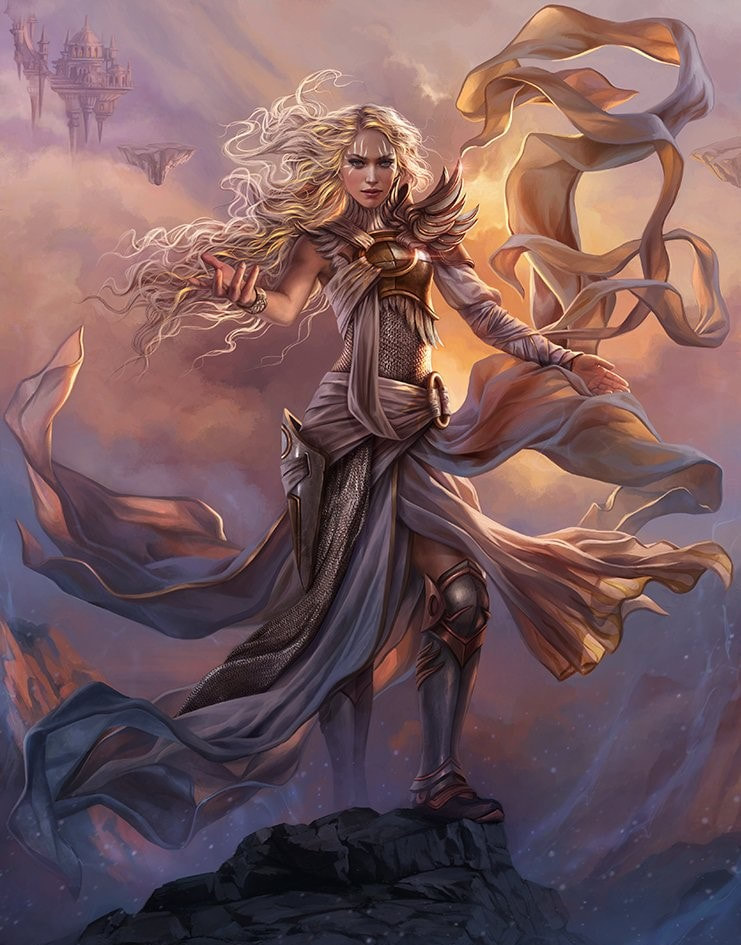 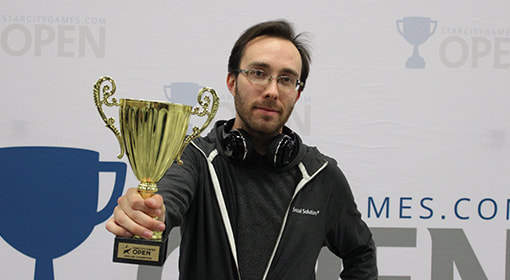 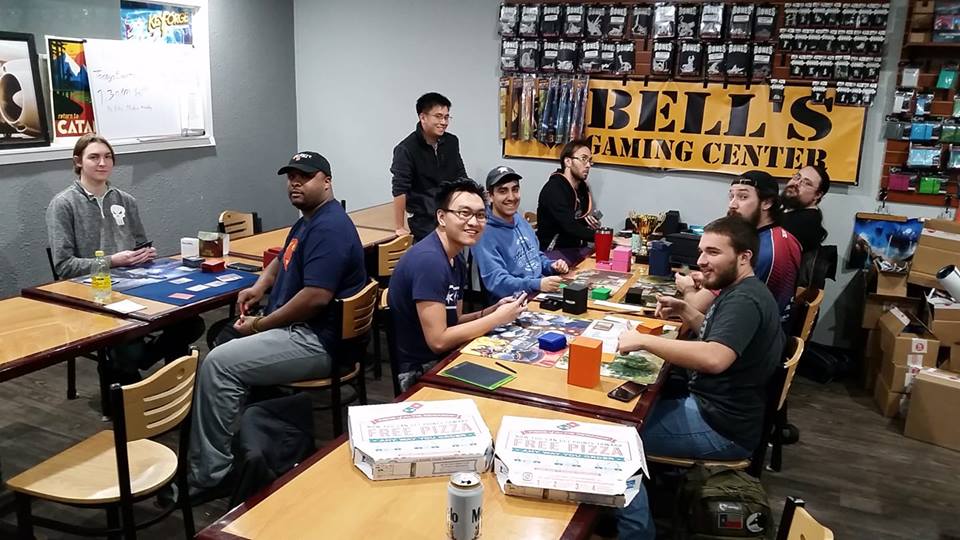 The last round of no pity modern Monday and also Rob's victory pizza party. Low key, casual, and a good time. Just the way Rob asked it to be at Bell's Gaming Center here in Round Rock. Feb 11, 2019
Our 1st Youtube Commercial Click Here
Bell's Blog
Magic:The Gathering Events
​ at Bell's Gaming Center
​6 Days A week! 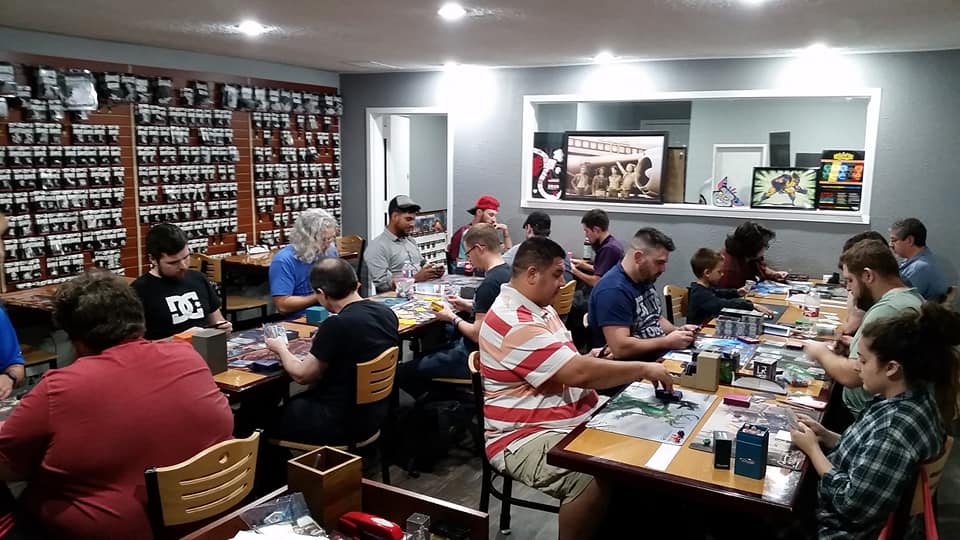 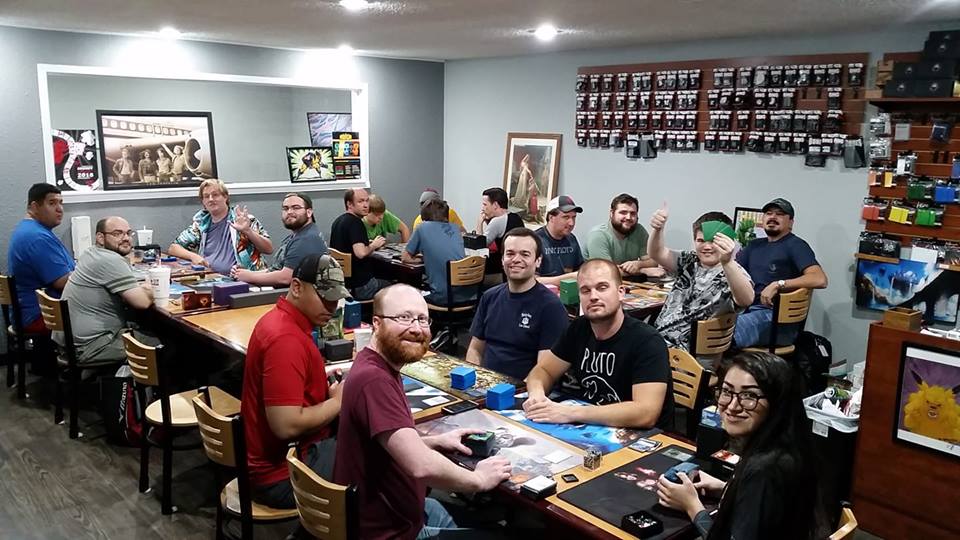 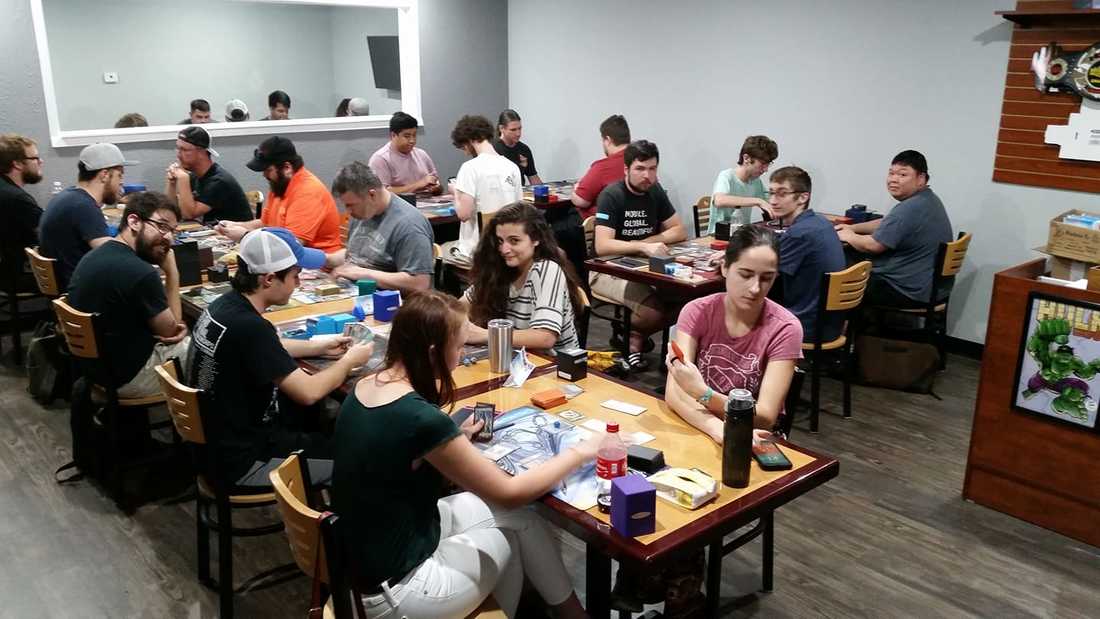